Check out the Flamingos new rooms. Recently the old tower of the Flamingo has undergone a magical transformation. Really nice bright rooms and shimmering interior décor. The historic Flamingo we took a standard room, the newly renovated Flamingo rooms are a great place to stay, and prices can be found around the 20 Dollar Range.

I was really impressed with these Flamingo rooms in this renovated part of the tower was the materials used the walls look a very attractive. The Flamingo opened on December 26th, 1946, after Bugsy Siegel took over construction of the hotel it cost $6 million to build originally and it only had 105 rooms a lot of people don’t know this, but Flamingo was considered to be the first luxury property on the Las Vegas Strip. The bathrooms are very nice. Look at the Caesars fountain and the Las Vegas Strip from the window of the room. 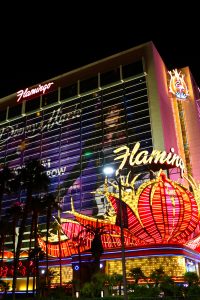 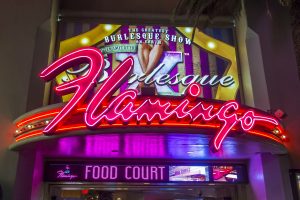 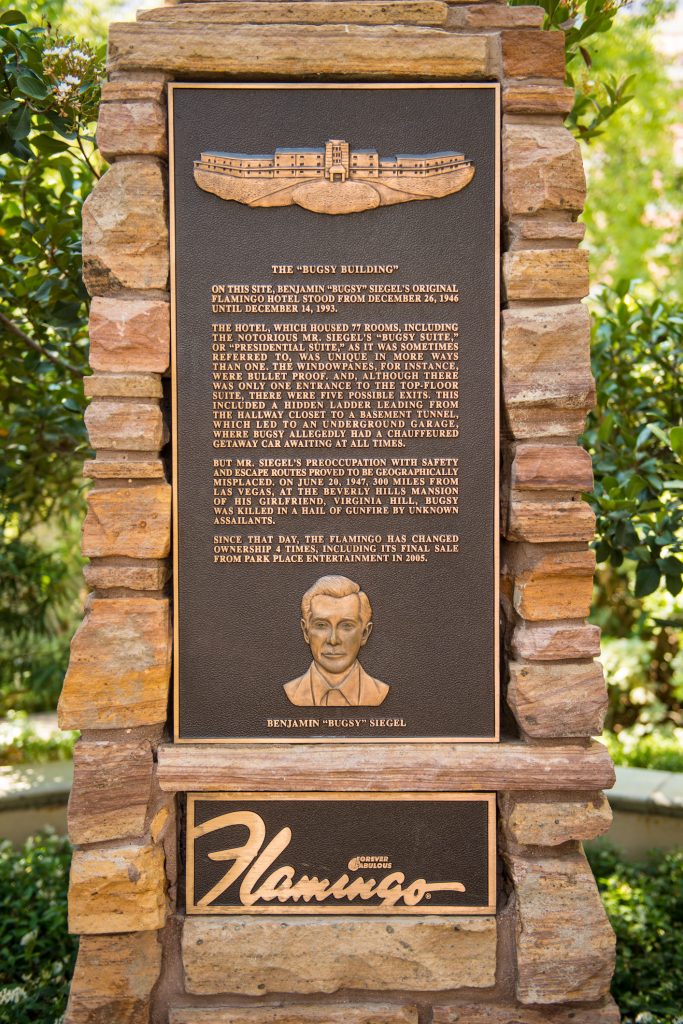 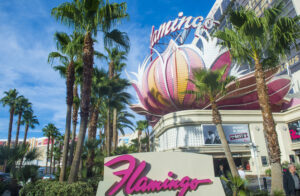 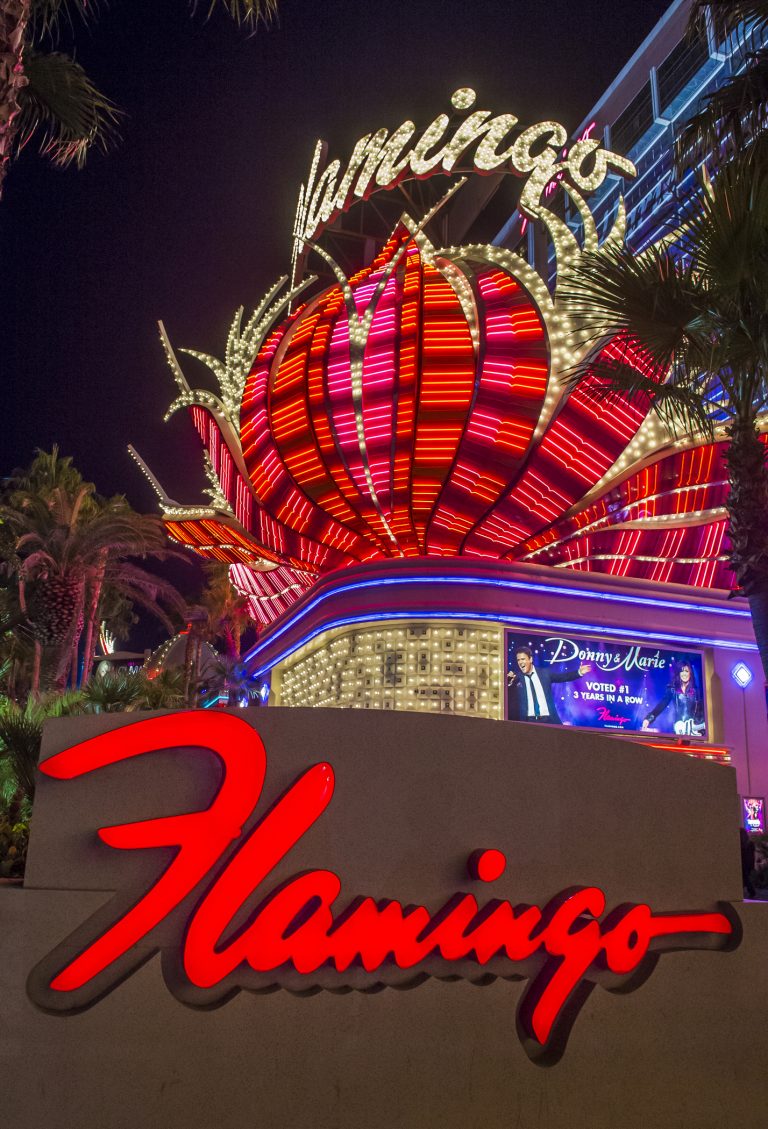 Flamingo began construction under the leadership of Billy Wilkerson, who was the Hollywood Reporter and owner of several nightclubs on Sunset Boulevard. Wilkerson wanted to bring the charm of Hollywood and Monte Carlo to Las Vegas through French casinos and bidets in bathrooms. Wilkerson bought the land on which the Flamingo was built and began construction at the end of 1945.

A year later, he sold his stake in the hotel and invested in Flamingo. El Cortez still pays homage to Ben with its Siegels 1941 restaurant, while Flamingo has the Bugsys bar. The restaurant’s name is a tribute to the founders of Flamingo in Las Vegas, Benjamin “Bugsy” Siegel, and business partner Meyer Lansky, who created the famous Bugsys bar. the first resort hotel on the Strip in 1946, changing Las Vegas forever. On March 1, 1947, the casino management changed the name of the hotel to The Fabulous Flamingo.

After Siegel’s death, it was taken over by Mo Sedway and Gus Greenbaum, tycoons of the nearby El Cortez Hotel. In 1998, the hotel became part of the new Hilton Park Place Entertainment company. Park Place opted not to renew the deal when it expired in late 2000 and the property was renamed Flamingo Las Vegas. The property has undergone several refurbishments, owners and refurbishments.

Today, Flamingo owns not only the resort, but also the timeshare owned by the Hilton Grand Vacations Company, bringing the total number of rooms on the ground to 3,638. There are four hotel towers with more than 3,600 rooms on site. According to a press release announcing the latest renovation plans, the newly refurbished rooms will feature retro-chic décor with accents that celebrate the rich history of flamingos.

Flamingo has its own poker room, sports betting and a wide selection of table and slot machines. Flamingo Las Vegas offers a variety of dining options, including restaurants such as Jimmy Buffetts Margaritaville and Mexican popular Carlos n Charlies, as well as the latest addition, the vintage-style Bugsy & Meyers Steakhouse, which will open in summer 2020. Even after decades and decades of success, Flamingo is still doing everything it can to light up the Las Vegas Strip and deliver world-class entertainment to its patrons. Flamingo thrived after Siegels’ death, setting a new standard for Las Vegas resort casinos with its sleek modern facade and luxurious furnishings.

Flamingo is the image of the great casino hotels that shaped the great years of Strips. It was to be the show of the year and raise money to complete an unprecedented hotel and casino project. Although construction on the 40-acre Flamingo was never completed, Siegel hoped to increase revenue with the opening on December 26, 1946. Construction was still underway and the Flamingo was ready to open by 1946.

Two weeks later, Flamingo closed and reopened on March 1, 1947 under the name The Fabulous Flamingo. Siegel, the frontman of the Las Vegas mob, worked side-by-side with Wilkerson for several months, but disagreements ensued, and Siegel eventually ousted Wilkerson and took full control of the project. Siegel ousted Wilkerson in April, and the resort made a profit in May, but that wasn’t enough to save Siegel. Less than a year later, Siegel was reportedly killed by his Mafia colleagues at his Beverly Hills home.

Meyer Lansky, one of Siegel’s oldest friends and partner of the Flamingo Hotel project, was deeply angry at deceiving, stealing and betraying his friends. To make matters worse for Siegel, Lansky wasn’t the only gangster yawning at him. In desperation, Siegel borrowed more money from other mobsters, which allowed him to complete the construction and hire Hank Greenspan to create a column in the Las Vegas Review-Journal called “Flamingo Chatter.” Although the completed Flamingo was now profitable, it was too late for Siegel.

Siegel and his “partners” in New York invested $1 million in properties already under construction by the owner of the Hollywood Reporter, Billy Wilkerson, and several very popular nightclubs on Sunset Boulevard. In 1946, Benjamin Siegel and his “partners” in New York and Frank Costello invested $1 million in this property in the Gaza Strip. They decided to let Wilkerson retain one-third of ownership and operational control. Siegel praised the Flamingo project and, together with the more experienced Wilkerson, served as the spokesperson for the new partner overseeing the remaining construction.

However, Wilkerson christened the site “flamingos” long before Siegel and Hill intervened. During a major renovation in 1993, Flamingo liquidated Bugsy Siegels’ private suite at the original hotel next to the pool. However, as a rare display of nostalgia for the Hilton (and Las Vegas), Flamingo erected a small brick temple in Bugsy, directly opposite the Garden Wedding Chapel in a flamingo habitat. Hotel guests constantly report seeing a “ghostly figure” in the flamingo garden, next to the Bugsy Siegel monument.

Like all street-side casino hotels, Flamingo is open to the public, although Flamingo itself minimizes paranormal activity that occurs within the premises. In the TV series Vega (1978-1981) starring Robert Urich, filmed entirely in Las Vegas, Flamingo Hilton starred in the first film. In the 1960 version, the Flamingos are five Las Vegas robbed by the roles of Dean Martin, Frank Sinatra, Peter Lawford, Sammy Davis Jr. and others One of the casinos. After all, the flamingo was born from the idea of Benjamin “Bagsey” Siegel, one of the most famous gangsters in the United States.

Flamingo hotel owner Billy Wilkerson and mobster Benjamin “Bugsy” Siegel have been friends since the mid-1930s, when Siegel was a regular at Los Angeles’ famous Wilkersons nightclub, Ciros on the Sunset Strip. Prior to joining Flamingo in 1946, he invested in and was active in other Las Vegas casinos. With gangster Bugsy Siegel as his silent supporter, he built a casino and hotel that would draw in and hold players in, setting the stage for a mid-century Las Vegas casino boom. Flamingos’ sleek design, contemporary décor and luxurious amenities are a dramatic turn in the history of a city that was previously embraced by the dusty Old West theme.